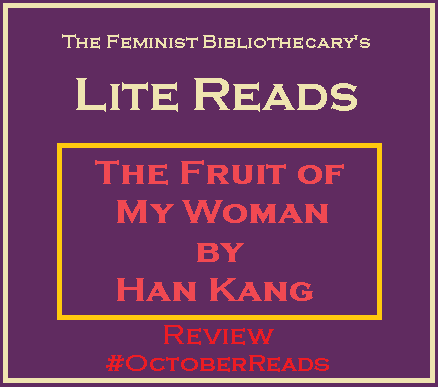 Week sixty-one of Lite Reads comes to a close as we finish this Halloween-themed selection, The Fruit of My Woman by Han Kang. There were questions as food for thought on social media as people had the chance to read it and think about it. Before I announce the next Lite Reads selection (October 27), I will be sharing my own thoughts here. Spoilers ahead for those who haven’t finished reading the story yet.

The Fruit of My Woman by Han Kang, translated from Korean to English by Deborah Smith, is a 1997 South Korean short story about a woman who transforms into a tree. An unnamed dysfunctional couple in their late twenties to early thirties are living an incredibly mundane life until the wife asks the husband to examine her bruises. The bruises are moderately sized and cover her body, but they don’t hurt and she doesn’t recall any cause for them. He initially brushes off any concerns, but when the bruises grow, he tells her to see a doctor, who insists that everything is normal. The bruises become increasingly worse, with almost her whole body turning a bruised green, and he insists that she see a doctor again before leaving on a week-long business trip. He returns to find the house in a state of stagnant disorder, and his wife on the balcony of their apartment in the midst of her slow transformation to plant. Up until this point, the story is told from the husband’s perspective, but it switches for a time to the wife’s. We see brief images of her early transformation before her husband left on the trip as she transforms alone while unconsciously addressing her absent mother. When the voice switches back to the husband, we watch him care for his wife as her transformation completes, including leaves, flowers, and berries, and in the spring, fruit. The story ends on his planting her fruit into new pots. The story uses flowery and evocative language, brilliantly translated by Deborah Smith, to show the unusual transformations, both the obvious physical one and the underlying emotional one.

The interactions and dynamics of the couple play a vital part in The Fruit of My Woman, particularly in how the story is largely narrated by the husband witnessing the transformation rather than the wife experiencing the transformation. The husband thinks of himself as lucky to be married to a woman who, although not beautiful, suits him in every way, but he also thinks of her hopes and dreams as being frivolous, unrealistic, and unnecessary, and when her body begins to display the many bruises, he doesn’t make the effort to go with her to see a doctor. The relationship appears to be a rather traditional one, with him expecting her to do the cooking and take his coat at the door, but the transformation changes the dynamics completely. It shifts to him taking on the more caring role to physically support her new shape once she has transformed fully, and we even witness him care for her throughout the seasons and plant her fruit into new pots. The husband is never really a likeable character, but we see his role as a husband shift as his wife’s transformation changes everything.

I think it’s interesting to see the ways medical intervention is looked at throughout this story, especially since the story begins with the wife’s transformation appearing as more of a medical mystery than anything truly transformational or supernatural. Watching the mysterious bruises appear is something I honestly related to as someone with a lot of health issues, and even as the wife visits the doctors, I continued to relate to the responses she got, like nothing being wrong with her despite obvious symptoms disproving the notion of health. I get the feeling that relatability for folks with chronic illnesses wasn’t something the author really intended, but it was something that struck me anyway, particularly considering that it seems as though there would be some medical evidence when a transformation so drastic is taking place but the doctors see nothing regardless. Obviously, once the transformation is further along, symptoms seem less medical and more supernatural, and the medical intervention appears to be a bit pointless.

The Fruit of My Woman features a woman literally transforming into a tree, which was a precursor to Han Kang’s novel The Vegetarian (also translated into English by Deborah Smith), in which a woman believes she is transforming into a tree but is struggling with mental illness. The two stories were written about a decade apart and deal with the same extremely specific idea but from wildly different viewpoints. I really enjoyed The Vegetarian (and I would recommend it to those who haven’t read it, but only with the caveat that readers be aware of many potential triggers: eating disorders, suicide, self-harm, child abuse, spousal abuse, animal abuse, rape, hospitalization, forced feeding), and I thought it was interesting to read this far more literal but ultimately supernatural take on a woman transforming into a plant. The more literal take on the concept is far less attuned to reality, and I can’t help but be delighted by that kind of contrast.

Overall, The Fruit of My Woman by Han Kang is a dark and twisted tale filled with beautiful language that I couldn’t help but be engaged by. I’m not sure I’d consider it a favourite, but it definitely engaged me, and I don’t regret reading it.

I hope everyone who participated by reading the story and following along on social media enjoyed the story. If you have more thoughts to add, please feel free to comment on this post, or anywhere on The Feminist Bibliothecary’s social media. Week sixty-two begins shortly, October 27, with a brand new short story selection, chosen as our final spooky fall read.